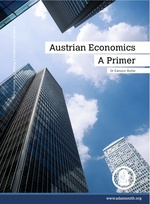 Following his introduction to Mises, Dr Eamonn Butler has released his latest book, Austrian Economics – A Primer. I recommend it strongly if you want to grasp the fundamentals of the Austrian School of Economics as quickly as possible: at just 118 pages, this pamphlet can be tackled in one sitting.

With Keynesian-inspired policies which ‘spend your way out of recession’ clearly not working, the Austrian School provides a better explanation for recent events than more ‘mainstream’ thinking, whether Keynesian or Monetarist.

Over the course of the book, Eamonn explains the Austrian view of the importance of human agency, values and knowledge in shaping the markets, that is social cooperation. Vitally, it explains the origin of the present cycle of boom and bust: the government’s cheap credit policies, which encouraged people to borrow and discouraged saving, creating an artificial boom that inevitably ended.

For many years, the Austrian School of Economics has been sidelined, but it’s great to see that it is now rising in popularity as people become increasingly critical of the way governments and central banks have handled the economy.

Butler’s systematic and simple yet comprehensive primer is a great addition to a stable which also includes The Austrian School: Market Order and Entrepreneurial Creativity by Jesus Huerta de Soto. While Huerta de Soto’s first-class book is perhaps aimed at a more technical audience, Butler has made the Austrian School highly approachable. A strength shared by both works is to be measured and inclusive where “Austrians” can be confrontational.

Eamonn has made a superb job of outlining this important school of thought and his book should prove a great success. You can buy it here.