A recent email campaign sought to suggest that this Government has been soft on tax avoidance and evasion. It is not true. As the responsible minister, David Gauke, has set out: HMRC has secured more than £85 billion in compliance yield since the beginning of the Parliament, £31 billion from large businesses and £850 million from high-net-worth individuals. The Government introduced the UK’s first general anti-abuse rule to tackle abusive tax avoidance arrangements. The Finance Act 2014 introduced measures to ensure […] 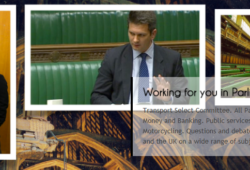 Today is the last day of the committee stage of this year’s Finance Bill. Details of all stages may be found here. I confess I look forward to it being over. I have been on the Committee since 23 April, making a sincere attempt to scrutinise every clause and promote my constituents’ interests. I spoke frequently, often criticising measures for one reason or another. I have certainly learned a great deal of the detail about the state of our country’s […]