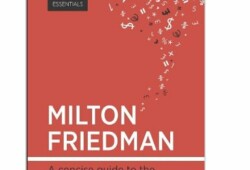 I usually romp through Eamonn Butler’s books and Milton Friedman: A concise guide to the ideas and influence of the free-market economist was no exception. The book sets out how Friedman became a public intellectual of worldwide influence, how to end financial crises and how to cure inflation. People, trade and currencies should be free, he argued. Government fails and markets work to promote diversity and help ordinary people. Friedman advocated a 100% reserve requirement on demand deposits, giving government […]

Continuing a study of money

In continuing my sometimes-reported study of money, I have been reading Milton Friedman’s “Capitalism and Freedom”. After dismissing a thoroughly automatic commodity standard, chiefly on the grounds of practicality, Friedman moves on. Reviewing the establishment and effects of the Federal Reserve System, he writes: No sooner was the [Federal Reserve] Act passed than World War I broke out. There was a large-scale abandonment of the gold standard. By the end of the war, the Reserve System was no longer a […]