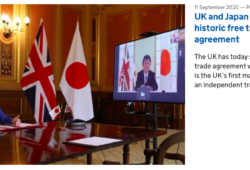 Today, the Secretary of State for International Trade announced the UK’s agreement in principle for a free trade deal with Japan. This is the UK’s first major trade deal as an independent trading nation. The UK-Japan Comprehensive Economic Partnership Agreement was agreed in principle by Japan’s Foreign Minister, Minister Motegi, and the Rt Hon Elizabeth Truss MP on a video call this morning. I am really pleased that the historic deal secures additional benefits beyond the EU-Japan trade deal and […]