An absolute Conservative commitment to an EU referendum 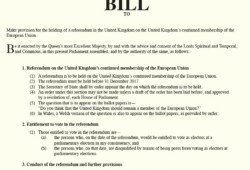 You can choose whatever name you like for the two types of government. I personally call the type of government which can be removed without violence “democracy”, and the other “tyranny”. — Karl Popper Before the Lisbon Treaty, I had no interest in being an MP. That Treaty was introduced to sidestep democratic rejection of the near-identical EU Constitution: I saw democracy dying at the hands of fanatical advocates of European political integration. Previously, I thought it was enough to vote Conservative […]

Following the debate I called on motorcycle rider licensing, the Motorcycle Industry Association has “applauded [my] defence of UK motorcyclists against EU Legislation“, The Motorcycle Industry Association (MCI) is fully supportive of MP Steve Baker’s comments this week in parliament, when he accused the EU of ‘heavy-handed mistreatment of bikers’. Steve Baker was referring to proposed legislation regarding motorcycle construction and changes to licensing, which are due to be imposed on the UK by the European Commission next year. Steve […] Tonight, I led a rather early adjournment debate on motorcycle rider licensing, where the EU has added to the joy of motorcyling, the dreariness, aggravation and expense of capricious bureaucracy. I was grateful to Norman Baker for answering the debate in the place of Mike Penning, who has just moved to the Northern Ireland office, after stoically defending riders rights and liberties as Roads Minister. Licensing is not the first battle that bikers have had to fight against the EU. […]

Yesterday, the Commons debated three important issues relating to the European Union: the 2013 EU Budget increase, reform of the Court of Justice of the EU, and the creation of an EU special representative for human rights. EU plans to increase its budget by 6.8% would lead to the UK’s contribution increasing by around £810m. Our 2012 contribution is 11.3% of the total EU budget; the proposed 2013 fund would mean the initial cost to UK taxpayers would be around £12.7bn. […]

Speech to the People’s Pledge Congress on the Eurozone crisis

Remarks on the Eurozone crisis at the People’s Pledge Congress

At the People’s Pledge Congress today, I appeared on a panel discussing the political implications of the Eurozone crisis. I would have loved to focus on democracy, freedom and the rule of law but the cause of the crisis was the key theme. As ever, I blamed our statist, inflationary monetary arrangements for creating the incentives and institutions which supported such dreadful behaviour and outcomes. I went on Russia Today (who asked) to discuss the campaign afterwards. You can find my speaking […]

I look forward to speaking on the Euro crisis tomorrow at the People’s Pledge Congress. In preparing, I rediscovered this: …the ideas of economists and political philosophers, both when they are right and when they are wrong, are more powerful than is commonly understood. Indeed the world is ruled by little else. Practical men, who believe themselves to be quite exempt from any intellectual influences, are usually the slaves of some defunct economist. Madmen in authority, who hear voices in […]