Book review: The Invisible Hook – The Hidden Economics of Pirates 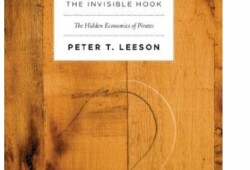 Peter Leeson’s study of “The Hidden Economics of Pirates”, The Invisible Hook, is theoretically correct, thoroughly grounded in historical research and fun to read. From the jacket: Pack your cutlass and blunderbuss–it’s time to go a-pirating! The Invisible Hook takes readers inside the wily world of late seventeenth- and early eighteenth-century pirates. With swashbuckling irreverence and devilish wit, Peter Leeson uncovers the hidden economics behind pirates’ notorious, entertaining, and sometimes downright shocking behavior. Why did pirates fly flags of Skull & […]

Professor Ha Joon Chang has become something of a hero to those who champion heterodox economic theory and who rail against the supposed intellectual hegemony of ‘neo-liberalism’. In a number of books such as Kicking Away the Ladder Chang sets out to overturn the alleged orthodoxies of mainstream economics by questioning the case for free trade as an appropriate development strategy in poorer countries and more widely making the case for a high regulation/big government agenda. These themes are vividly […]

I spoke last night in the European Union (Amendment) Act debate: Steve Baker (Wycombe) (Con): First, I wish to associate myself with the remarks of my hon. Friend the Member for Harwich and North Essex (Mr Jenkin). Too often when addressing questions such as the one under discussion we get bogged down either in procedural matters or matters that verge on the nationalistic, but this evening he has transcended that old territory and talked about what is good for the UK […]