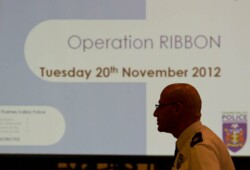 This morning, police arrested 8 men in High Wycombe for alleged sexual exploitation of a young girl over a number of years. She is still under 18. A detailed statement has been released by Thames Valley Police. Further information is available on the Thames Valley Police Facebook page. The alleged offences are utterly vile and all decent people will join in condemning them. I wish Thames Valley Police and the Crown Prosecution Service every success in securing just convictions of the guilty and long […]

There is to be a statement on this subject later today. It will be interesting to see what powers are transferred, to what extent British people are subjected to overseas police powers by this measure, and what democratic control is to be exercised over those powers… Update: The Home Secretary’s statement is here. Big Brother Watch wrote about the EIO here, before we opted in: The EIO is intended to make it easier to gather evidence on another member state’s […]

A hectic start to the week

Yesterday, I began getting to know Wycombe’s police team before speaking to Breathe Easy Buckinghamshire on the nature of society and social cooperation, from a Big Society and Cobden Centre perspective. I caught up with the constituency team before heading into London. I submitted an HS2 question to the Government, caught up with correspondence and finished the day listening to Sir Richard Dannatt give the CCF’s Wilberforce lecture. Today, I spent a long morning on correspondence and case work before a lunch briefing on manufacturing. The rest […] Via Police cannot be trusted with fines, magistrates warn – Telegraph: Police cannot be trusted to hand out summary justice and will act as “judge and jury” if given powers to issue more on-the-spot fines, magistrates have warned. In an extraordinary attack, the Magistrates’ Association said it is a “certainty” that officers will misuse powers because they cannot be “relied on” to handle them appropriately. The comments have been made as part of the Magistrates’ Association response to the Government’s plans […]

Via Police close down Facebook barbecue for 15 people – Telegraph: When Andrew Poole organised his 30th birthday party and posted invitations on the social networking site Facebook, he was expecting only 17 guests including family members. He was therefore a little surprised when eight police officers, some dressed in body armour, arrived with a riot van and helicopter support. Mr Poole, a coach driver, claimed he was doing little more than lighting a barbecue for a few of his […]

While these are allegations, not facts, it is shocking that they can be seriously made in the UK: Metropolitan Police officers subjected suspects to waterboarding, according to allegations at the centre of an anti-corruption inquiry. The torture claims are part of an investigation which also includes accusations that evidence was fabricated and suspects’ property was stolen. It has already led to the abandonment of a drugs trial and the suspension from duty of several officers. However, senior policing officials are […]

Ian Tomlinson died shortly after this encounter with the police

This is no one’s finest hour: More details from the Guardian and The Times.

Police are targeting thousands of political campaigners in surveillance operations and storing their details on a database for at least seven years, an investigation by the Guardian can reveal. Photographs, names and video footage of people attending protests are routinely obtained by surveillance units and stored on an “intelligence system”. The Metropolitan police, which has pioneered surveillance at demonstrations and advises other forces on the tactic, stores details of protesters on Crimint, the general database used daily by all police […]

Independent think tank Reform calls for regional police forces to be split and the Metropolitan Police to be given a mandate to run serious crime fighting across England and Wales. Without effective police reform, England and Wales will lose the fight against crime in years to come. Serious crime is rising and mutating as new crimes emerge such as people trafficking and internet fraud, creating entrenched social problems. But the nightmare position of the public finances means that the police’s […]

Chris Grayling on law and order

Today, I listened to David Cameron introduce Chris Grayling for his first major speech as shadow home secretary. It was great stuff: heartfelt, tough and full of measures that will be welcomed. In his introduction, David Cameron explained the need for substantive solutions to serious problems. He discussed Conservative plans for police reform, local accountability and fixing our broken society. David was clear that the task of the Home Office will be to fight crime, not to be a social […]