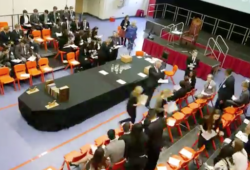 NB. This post was written by my researchers Tim Hewish and Gareth Crimp We were thrilled to initiate, design and help create Westminster to Wycombe (W2W), a Parliamentary-style schools debate for local sixth form students. What started as an idea last summer grew into a successful February event for the pupils and schools that participated. W2W was kindly hosted by Highcrest Academy and coordinated under the leadership of Emma Bowden. Highcrest’s tremendous effort ensured that their hall was transformed into […]