The Four Horsemen, Russell Brand and the biggest problem with democracy 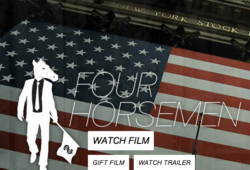 I found time this morning to watch the film Four Horsemen. It’s about what’s fundamentally wrong with the world and it features some major thinkers from Britain and the world. I feel fairly sure many of them did not know that the central point of the film is to explain why money should be separated from the state. As I set out in my maiden speech, Today, money is a product of the state. The Bank of England controls the […]

Atlas Shrugged on the big screen

As I have reported before, there’s much in Ayn Rand’s writing that I do not like: As an articulation of what goes wrong when government and other coercive institutions intervene in the economy and in society, it is a masterpiece. As an articulation of the timeless morals which have sustained human society, it leaves something to be desired: magnanimity. Ironically, Aristotle, who made magnanimity “the crowning virtue”, was the only philosopher to whom Rand would acknowledge a philosophical debt: it […]

Via ConservativeHome, we learn that the US Tea Party movement has made a movie: Something else to look forward to in the Autumn is a British feature-length documentary on the continuing financial crisis. I made my contribution a few weeks ago.

Why The Prisoner remake is dire – Times Online

It turns out The Prisoner is being remade, but it’s not all good news. Via Why The Prisoner remake is dire – Times Online. Here’s the good news about the remake of The Prisoner that’s heading to ITV screens this month: you get to see what Ian McKellen, who plays Number Two in Patrick McGoohan’s Orwellian dystopia, would look like if they ever cast him as a Bond movie villain. The answer is he’d be slyly, sinisterly magnificent. And the bad […]