Via the Office of Fair Trading,

Rises in pump prices for petrol and diesel over the last 10 years have been caused largely by higher crude oil prices and increases in tax and duty and not a lack of competition, an OFT report has found.

The OFT found that, pre-tax, the UK has some of the cheapest road fuel prices in Europe. In the 10 years between 2003 and 2012 pump prices increased from 76 pence per litre (ppl) to 136ppl for petrol, and from 78ppl to 142ppl for diesel, caused largely by an increase of nearly 24ppl in tax and duty and 33ppl in the cost of crude oil.

The Government recently commissioned Deloitte to conduct a study into the market for road fuels.They have provided some surprising and controversial information about the pass through of crude oil price changes to retail prices:

It’s not the answer most of us would have expected. The Daily Mail reports allegations of a whitewash but rejecting actual evidence requires more than a dislike for the conclusions drawn.

It’s clear the main problem is tax. I was glad to work with colleagues to secure a cancelation of the last fuel duty rise but Government is finding it extremely difficult to cut spending. Until there are widespread demands for lower spending, substantially lower fuel duty seems unlikely.

The other key issue is the height and volatility of the price of oil. For reasons explained here, we should blame the Federal Reserve far more than we do. This chart shows how the oil price has been low and relatively stable in gold since the end of WWII but high and volatile in dollars since the final link to gold was broken by Nixon in the early 70s: 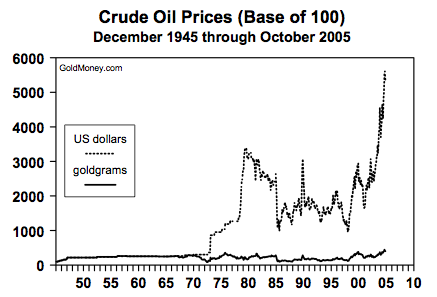 Our broken institutions of money and banking are still wreaking economic chaos. Taxes are too high because the Government must cover the cost of its policies. The vast majority of us object to high pump prices but this OFT report confirms that the blame lies, one way or another, with the state.