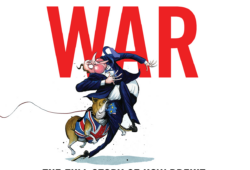 In its coverage of the most prominent characters and events of the referendum campaign and leadership contest, Shipman’s account is one of breathtaking completeness and great accuracy. To read All Out War is to relive the final year of the decades-long EU campaign. In all the circumstances, Shipman was right to emphasise the central figures, not least to constrain what is already a book of over 600 pages. However, many of the Parliamentarians who struggled resolutely for decades to achieve […]

The Government is making good progress for Calais Child Refugees

On 26 October, the French Government announced that the Calais Jungle had been cleared. The migrants who had previously been living at the camp have been entered into the French immigration and asylum system. Questions have been asked in recent days about the fate of unaccompanied children living in Calais. There has been a statement in the Commons by the Home Secretary. The question of the plight of child refugees and migrants in Calais properly arouses strong views. Our hearts […] During the second reading of Bob Blackman’s Homelessness Reduction Bill in Parliament on the 28th October, I asked Mr. Blackman the following question: I’m here to support my Honourable friend in his excellent Bill today. I just observe that London boroughs seeking temporary accommodation is a factor which considerably disrupts the housing in Wycombe for my constituency. Will he agree with me that we need much more affordable homes both to buy and to rent everywhere, and especially in London. […] During Treasury Questions on Tuesday 25th October, I tortured the rules of the House to remain in order as I asked the Chief Secretary to the Treasury the following question: Steve Baker: Will the Right Honourable Gentleman agree with me that reducing the anti-competitive market distortions is both a fiscal way to promote manufacturing and insure our country is best placed for new trade deals The David Gauke replied I do agree that removing distortions in the economy results in a more efficient […] In Wycombe, we all care passionately about the development of our town and the maintenance of the local green belt. Many constituents have sent emails raising concerns about Wycombe District Council’s local plan and the future of our protected green spaces. On Monday 10th October, I raised the issue about the preservation of green-belt land during the debate about the Neighbourhood Planning Bill: Mr Steve Baker (Wycombe) (Con): Before my right hon. Friend moves on, may I ask whether he will use this Bill to […]

I appreciate how important broadband is to residents and businesses in Wycombe. Fast, reliable broadband is now seen as the norm in an advanced economy, not a luxury. It underpins economic growth and allows us to function in a digital age. Over 90 per cent of UK premises are now able to connect to superfast broadband, and we are on track to reach 95 per cent by the end of next year. This means that the UK has the highest superfast broadband […]

Airport expansion in the South East In recent weeks, I have heard from a number of constituents urging a final decision on airport expansion in the UK. I have long supported Heathrow Hub for its potential to increase capacity cost-effectively while decreasing road traffic and aircraft noise. The Airports Commission’s final report was published in the Summer of 2015. It made a strong case for expansion in the South East. The Government has accepted the case for expansion and the Commission’s shortlist of options. It is vitally important […] Today, we will choose together what kind of government will best promote our common good for many years to come. I believe it is time to throw off the institutions of the European Union, a centralising bureaucracy whose existence embodies the dismal fear of self-governing peoples now commonly afflicting our ruling elites. I believe that a fundamental right of a free people is to have the dignity of choosing peacefully at the ballot box who shall govern. That government derives […] Local voters want to end the live export of animals. Parliament cannot do so in the EU. Local voters also oppose aspects of the EU’s TTIP trade deal but trade policy is decided by the EU, not the UK. The EU can speak on our behalf on foreign affairs, which affects the security of British people. Plans to strengthen European foreign policy and back it with European armed forces have been delayed until after the referendum. According to the President of the […]