The Austrians Were Right, Yet Again – Jeffrey A. Tucker – Mises Daily

Via The Austrians Were Right, Yet Again, Jeffrey A. Tucker sets out the way it is in the USA:

After three-plus years of floundering around, a consensus has finally arrived that we are back in recession. Growth is not happening. The meager statistical growth of the past few years — no one dared claim it amounted to full recovery — was probably illusory.

He goes on to catalogue the government interventions which have been a failure before quoting some of the many Austrian-School commentators who explained why that would be so. Finally, he writes:

Why does anyone continue to take Krugman and company seriously? In fact, why does anyone take seriously those who warned that unless we tried the Keynesian plan, the world would end and we would miss an opportunity for a glorious recovery? It’s not just the New York Times; it’s also the Wall Street Journal and the entire financial press that continues to be enthralled with the absurdities of Keynesian theory.

Let’s rub it in a bit more: The Austrians were also correct that the boom before 2008 was unsustainable. See “The Bailout Reader.” There is no joy in being right here. It is pathetic really that any informed observer of events would not be correct in light of experience and the common-sense observation that government can’t make prosperity appear no matter how many kabuki dances Treasury officials do.

I’m glad to see Douglas Carswell MP making the case that the mainstream commentators have comprehensively failed us. I explained some of the reasons why they do so on ConservativeHome in December: they lack an adequate theory of capital, amongst other things.

No single school of thought has an absolute monopoly on correctness, but when one school is consistently closer to correctness than another, maybe it’s time to look at the relevant ideas. For example, given a robust theoretical understanding of money, it’s possible to produce a measure of money supply growth which gives a good basis for analysing monetary effects on the economy: 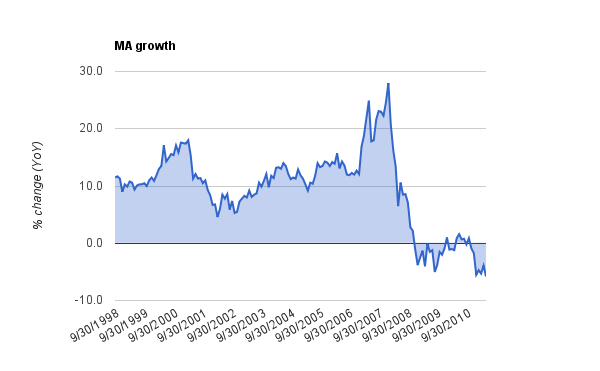 The rate of change of the supply of Sterling

That astonishing precipice in money supply growth happened before Lehman Brothers’ collapse and the tightening of credit conditions. That doesn’t justify QE, which redistributes wealth towards those who receive the money first, or further artificial lowering of interest rates, which further distorts the structure of the economy. It does illustrate the importance of having the right theoretical equipment when analysing practical events. Without that, how can we expect good quality policy recommendations?

A primer on the Austrian School is here and these are some of the better blogs: